Soprano Sherezade Panthaki’s international success in music of the Baroque and beyond has been fueled by superbly honed musicianship; “astonishing coloratura with radiant top notes” (Calgary Herald); “a full, luxuriously toned upper range” (The Los Angeles Times), and passionately informed interpretations, “mining deep emotion from the subtle shaping of the lines” (The New York Times). An acknowledged star in the early-music field, Ms. Panthaki enjoys ongoing collaborations with many of the world’s leading interpreters including Nicholas McGegan, Masaaki Suzuki, Mark Morris, Nicholas Kraemer, Matthew Halls, Paul Agnew, and Lawrence Cummings. This season marks return appearances with Philharmonia Baroque Orchestra, Bach Collegium Japan, Tafelmusik Baroque Orchestra, The Boston Early Music Festival, The San Francisco Early Music Festival, Houston Symphony Orchestra, Music of the Baroque (Chicago), Calgary Philharmonic Orchestra, as well as new engagements with the Minnesota Orchestra, the Detroit Symphony Orchestra, and Musica Angelica (Los Angeles). Ms. Panthaki has ongoing national and international solo appearances in various programs throughout the year with the New York City-based Parthenia Viol Consort. Her 2019 debut performances of Handel’s Samson with the NDR Radiophilharmonie in Hannover, Germany, elicited the review “With her exuberant virtuosity, with her elegance and powerful radiance, Panthaki is a new, trailblazing type among the female singers of old music – she is a highly dramatic soprano of the Baroque, an “Isolde” in one of Handel’s oratorios. When she sings, it is not simply an aria; it is an event.” (Hannoversche Allgemeine).

Notable performances from past seasons include Vivaldi opera and oratorio arias with the Los Angeles Philharmonic at the Hollywood Bowl, as well as with the St. Louis Symphony Orchestra; Handel’s Messiah with Bach Collegium Japan, the National Symphony Orchestra, National Arts Orchestra at the Kennedy Center, Kansas City Symphony, and numerous others; a US tour of Bach’s Christmas Oratorio with Bach Collegium Japan; Handel’s Atalanta, Ode for St. Cecilia’s Day, Joseph and his Brethren, and “Italian Baroque Music from the Jewish Ghetto” with Philharmonia Baroque Orchestra; the title role in the Boston Early Music Festival’s concert performances of Handel’s Almira; the role of Belinda in Purcell’s Dido and Aeneas, Handel’s L’allegro, il Penseroso ed il Moderato, and the role of Galatea in Acis and Galatea with the Mark Morris Dance Company; Bach’s Mass in B Minor and Magnificat at the Oregon Bach Festival; a staged production of Rameau’s Les Indes Galantes at the Metropolitan Museum of Art with Opera Lafayette; Vivaldi solo works with the Orchestra of St. Luke’s at New York’s Central Park outdoor Naumberg Orchestral Concert Series; Mozart’s Grand Mass in C minor and Bach’s St. John Passion with the Spoleto Festival USA Orchestra, Haydn’s opera L’isola disabitata with the American Classical Orchestra, Beethoven’s Ninth Symphony with the Orlando Philharmonic, Bach’s St. Matthew Passion and St. John Passion with John Scott and the St. Thomas Choir of Men and Boys; Handel’s Solomon with the Radio Kamer Filharmonie (Holland); and Handel’s Saul with the Tafelmusik Baroque Orchestra in Toronto.

Firmly at home in the numerous Baroque oratorios, operas, and cantatas of Handel, Bach, Vivaldi, Purcell, and Monteverdi, Ms. Panthaki is no stranger to 19th, 20th and 21st century concert repertoire as soprano soloist. She is widely acclaimed for her interpretations of Brahms’ Requiem, Orff’s Carmina Burana, and Poulenc’s Gloria; notable among her new music premieres is the soprano role of Emily Dickinson in Martin Bresnick’s oratorio Passions of Bloom. She will appear as the soprano soloist in Mendelssohn’s Elijah, to celebrate the trailblazing career of conductor Marguerite Brooks, at Yale University.

Ms. Panthaki’s discography includes the recently released recording of Handel’s Joseph and his Brethren with Nicholas McGegan and Philharmonia Baroque. Reviewing her recent performance of this work San Francisco critic Joshua Kosman commented, “…it becomes increasingly difficult to find words that will adequately convey the multifold splendor of her singing. It is full-bodied and rich in coloration, yet her phrases move with all the litheness and grace of a dancer. She reaches notes that other singers can only eye with envy, and does so with effortless precision. She tears through the most demanding passagework without batting an eye or missing a beat. Her diction is flawless. She’s a phenomenon, and only getting more marvelous with each passing year.” (SF Gate)

An active and passionate music educator, Ms. Panthaki is frequently called upon to present vocal masterclasses at Universities and Arts Schools across the United States; most recently to students from Houston Grand Opera, Rice University’s Moore School of Music, the University of Texas School of Music, Rollins College, and the Governor’s School for the Arts at West Virginia Wesleyan College. She served as the Christoph Wolff Visiting Performer at the Harvard University Department of Music where she gave masterclasses and performances in collaboration with Nicholas McGegan and the Philharmonia Baroque Orchestra. Ms. Panthaki has served as Vocal Coach for the Yale Baroque Opera Project, and currently teaches voice lessons to scholarship winners of the top undergraduate and graduate choral ensembles at Yale University.

Born and raised in India, Ms. Panthaki began her musical education at an early age. Following intensive study and earning national distinction as a young pianist, she turned to singing and found a more personal and expressive means to connect with audiences. She holds an Artist Diploma with top honors from the Yale School of Music and the Yale Institute of Sacred Music, where she was the winner of multiple awards of distinction including the prestigious Phyllis Curtin Career Entry Prize. She earned a Master’s degree from the University of Illinois, and a Bachelor’s degree from West Virginia Wesleyan College. www.sherezadepanthaki.com 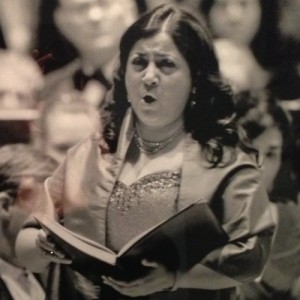