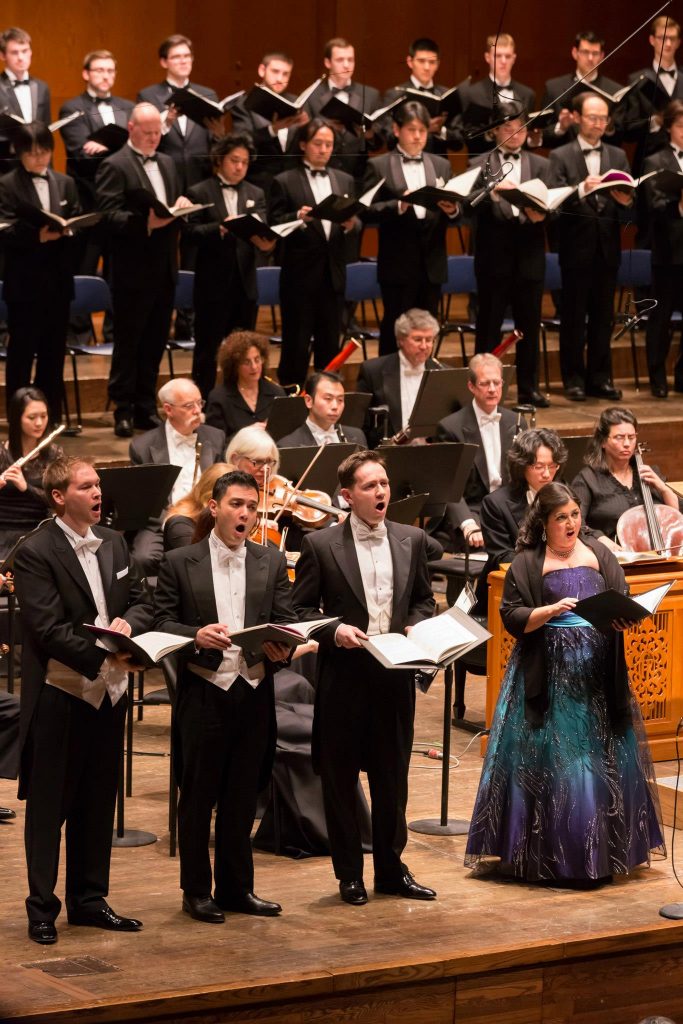 Recent and upcoming seasons include performances with the New York Philharmonic, Philharmonia Baroque Orchestra, Bach Collegium Japan, Wiener Akademie (Austria), NDR Hannover Radiophilharmonie (Germany), the Los Angeles Philharmonic, the Boston Early Music Festival, Tafelmusik Baroque Orchestra (Canada), Minnesota Orchestra, St. Louis Symphony, Calgary Philharmonic, Houston Symphony, Seattle Symphony, Mark Morris Dance Group, St. Thomas Church Fifth Avenue New York, The Choir and Orchestra of Trinity Wall Street, Voices of Music, The San Francisco Early Music Festival, Music of the Baroque (Chicago), Minnesota Orchestra, the Detroit Symphony Orchestra, and Musica Angelica (Los Angeles). Ms. Panthaki has ongoing national and international solo appearances in various programs throughout the year with the New York City-based Parthenia Viol Consort. Her debut performances of Handel’s Samson with the NDR Radiophilharmonie in Hannover, Germany, elicited the review “With her exuberant virtuosity, with her elegance and powerful radiance, Panthaki is a new, trailblazing type among the female singers of old music – she is a highly dramatic soprano of the Baroque, an “Isolde” in one of Handel’s oratorios. When she sings, it is not simply an aria; it is an event.” (Hannoversche Allgemeine).

Ms. Panthaki’s discography includes the recently released recording of Handel’s Joseph and his Brethren with Nicholas McGegan and Philharmonia Baroque. Reviewing her recent performance of this work San Francisco critic Joshua Kosman commented, “…it becomes increasingly difficult to find words that will adequately convey the multifold splendor of her singing. It is full- bodied and rich in coloration, yet her phrases move with all the litheness and grace of a dancer. She reaches notes that other singers can only eye with envy, and does so with effortless precision. She tears through the most demanding passagework without batting an eye or missing a beat. Her diction is flawless. She’s a phenomenon, and only getting more marvelous with each passing year.” (SF Gate). Recent CD releases include solo Bach cantatas 199 and 84 with the Cantata Collective, Steffani duets with Jory Vinikour, and Graupner’s opera Antiochus und Stratonica with the Boston Early Music Festival.

An active and passionate music educator, Ms. Panthaki is frequently called upon to present vocal masterclasses at Universities and Arts Schools across the United States; most recently to students from Houston Grand Opera, Rice University’s Moore School of Music, the University of Texas School of Music, Rollins College, and the Governor’s School for the Arts at West Virginia Wesleyan College. She served as the Christoph Wolff Visiting Performer at the Harvard University Department of Music where she gave masterclasses and performances in collaboration with Nicholas McGegan and the Philharmonia Baroque Orchestra. Ms. Panthaki has served as Vocal Coach for the Yale Baroque Opera Project and has taught voice lessons to graduate choral conductors at Yale University. She currently heads the Vocal program at Mount Holyoke College.

Ms. Panthaki is a founding member and artistic advisor of the newly-debuted Kaleidoscope Vocal Ensemble – a vocal octet of world-renown artists of color, celebrating racial and ethnic diversity in performances and educational programs of early and new music. In addition to headlining arts festivals, international music conferences, and concert series, the ensemble fosters in-depth conversations on issues of diversity and inclusion in classical music and arts education.

Born and raised in India, Ms. Panthaki began her musical education at an early age. Following intensive study and earning national distinction as a young pianist, she turned to singing and found a more personal and expressive means to connect with audiences. She holds an Artist Diploma with top honors from the Yale School of Music and the Yale Institute of Sacred Music, where she was the winner of multiple awards of distinction including the prestigious Phyllis Curtin Career Entry Prize. She earned a Master’s degree from the University of Illinois, and a Bachelor’s degree from West Virginia Wesleyan College.